Showing posts from May, 2010
Show all

THE MAID AND THE PIT BULL 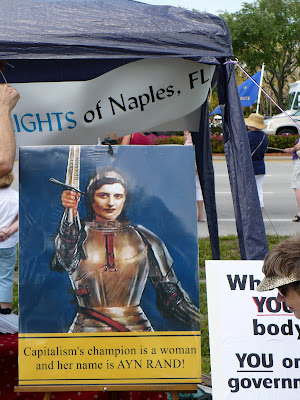 "From Napoleon to the present, French politicians of all leanings have invoked her memory” (Wikipedia). The quote refers to Joan of Arc. Here, though, the image invoking her memory is not that of the Maid of Orleans, but of the Pit Bull of capitalism, Ayn Rand. Yes, that’s the same Rand Texas Congressman Ron Paul chose as the namesake for his son, the Kentucky ophthalmologist running for the U.S. Senate. Since repeatedly confusing his area of medicine with podiatry by fitting his foot in his mouth (the better to say what he really thinks), Rand has taken to appearing in scrubs. Presumably, this authenticates his status as a healer, a man anxious to treat the nation’s ills. So it makes sense to reflect on his namesake Ayn Rand, suited up in full armor on a poster at a Tea Party rally last month in Naples, Florida. Mounted on horseback as military leaders always are, Saint Ayn is carrying the colors into battle. This time, it’s not the Siege of Orleans in the fifteenth century,
1 comment
Read more

May 22, 2010
I am grateful to the German language for a word—schadenfreude. It refers to the warm glow that honest people can’t deny feeling when someone they don’t like suffers in some way. It’s nothing to be proud of, this feeling, but it’s definitely there. --Are you happy to be back in Michigan? --Very. --Happy to be teaching again this summer? --Almost very. --Anyway, you look pleased with yourself. What are you so jovial about? --A mental image. I see Ayn Rand’s namesake down in Kentucky. --Really? Seeing Rand Paul should produce something very different in you. Say, a Tourette moment. --Oh, I’m sure a Tourette moment can’t be far away, but just now I’m enjoying the mental picture. --Do you know who Paul looks like to me? Bill Hailey, of Bill Hailey and the Comets. Remember him? Rand Paul has the same hilarious hairstyle. --I’m trying to avoid ad hominem arguments. You have your Rand Paul, I have mine. I see him wearing one of those headlamp reflector things. Ophthalmologis
6 comments
Read more
More posts